You started wrestling in Oregon, correct? What are your recollections from training up there?

I tried to start my wrestling career in Oregon but ran into a lot of problems, let me explain. I was living in Portland, Oregon when I decided that I wanted to leave the ranks of being a devoted fan and become one of the wrestlers. I asked around trying to get information on how to get into the business but none of the local wrestlers would talk to me about the business. I asked several wrestlers to train me and they were less than helpful. I asked Dutch Savage and he told me to go get a job driving a truck, Tony Borne told me to go to college and get a real job, and Sandy Barr (local referee) told me “no one breaks into professional wrestling in Oregon, kid”.

Finally, a wrestler from Vancouver B. C. (name left out because he is a jerk and a not a credit to the business) came to Portland for a few spot shows. I talked to him about breaking into the business and he actually listened to me. When I was finished he said that he would train me (for a lot of money in advance) but I could not tell anyone or he would get in trouble with the promotion and the other wrestlers. So like a fool, I agreed…after all, he is the only one that was even helpful. Well as you might have already guessed, that was a very bad decision on my part. He met with me only two times, then left the area (with my money) and I never heard from again.

I was frantic, my one and only chance to get into the business was gone. I went to every match asking all the local wrestlers if they knew where he was and no one knew. The wrestlers got tired of me asking about him and they started to ask me why I was trying to locate him. Word of what happened spread like wildfire because I told anyone that would listen my story and finally promoter Don Owens heard what had happen to me.

Don would not speak to me but he talked to a retired wrestler named Jack Kaiser that still refereed and asked him to help me. Jack met with me and we talked. He said that I had been taken advantage of and that he would make me a deal. The deal was, he would get into the ring with me and work out one time. If he though I had what it takes to become a professional wrestler at the end of that workout, then he would train me for free but if I did not impress him I could never bother him again. Well he liked what he saw and took me under his wing and introduced me into the wonderful world of professional wrestling.

When I was ready for the ring, Don Owens would not book me because I was a local boy. “Go out and get some experience, call me and I will book you then”, he said.

With whom were some of your early matches?

Believe it or not, in my first pro match I wrestled my trainer Jack Kaiser. I know that needs some explaining so let me share that story with you. When my trainer would referee some of the spot shows, I would go with him. I hoped that some day one of the local wrestlers would have car trouble, get sick or for whatever reason not make the show and I could substitute. At last, Tony Borne was promoting a spot show on the Indian Reservation at Soap Lake, Washington and Rocky Monterio had car trouble and did not show up. Jack asked Tony if I could substitute for him. Tony left for a short time, then returned and said no one will work with me because I was too green. Jack said, “Hell, I will work with the kid, let one of the boys referee the match”. Tony laughed and said, “Ok do it”.

Jack was excited being back in a pair of tights and I was very excited being in front of my first wrestling audience. We had a good match; Jack was so talented he could have a good match with a broomstick. That first match was all it took. I was hooked on being a pro wrestler and wanted to wrestle every night so it was off to Arizona to be a full time wrestler.

When I got to Arizona, I was so lucky to be able to work with some really great wrestlers. I worked with Tito Montez, Kurt Von Steiger, Chuck Karbo, Chris Colt, Ron Dupree, Bobby Mayne (Jaggers), and Sandy Parker. Working with these wrestlers helped me to lay the foundation of building blocks it takes to become a great wrestler.

You drifted down to Arizona in the early 1970’s. Wasn’t this when Kurt Von Steiger was promoting it?

In the 70’s, I had finished training and needed to get some ring experience. Tito Montez was working the Portland area and told me that Kurt was going to start promoting Arizona and needed some wrestlers to work for him. I talked to Kurt, he booked me and it was off to Phoenix for full time wrestling.

What was your impression of the regional wrestlers in Arizona? There were several good ones that never left the area.

I found all the wrestlers in Arizona to be very talented and a credit to the business. I felt honored to be able to work with them.

What was Kurt Von Steiger like to work with as a promoter?

Kurt was great to work for and with (Kurt wrestled and promoted). He paid the wrestlers all he could and still keep the promotion going. He always seemed to know what to do to draw a bigger crowd next week, and he would listen to suggestions from the boys. Kurt was willing to give new “green” talent a chance to learn, and get experience but he always kept some good experienced talent there to keep things going correctly.

Didn’t they have you feuding with Chuck Karbo?

Yes, Chuck was there working main events. He was doing very well and I was lucky to be able to work with him. We were feuding and worked lot of angles.

You had dealings with Nick Gulas, I assume? I have heard some good and bad about him. What is your impression?

I did have some dealings with Nick while I was working for the Nashville office. Nick treated me ok and I have nothing bad to say about him. When I was there Jackie Fargo was the booker, he liked me and I probably was treated better than some of the wrestlers.

Then you went down south and stayed most of your career, right?

I did go down south and stayed there for a while but I always had a dream of going back home to the Pacific Northwest and letting everyone know that I had made it. Wrestling magazine articles, newspaper articles and television…yeah, I have made it, a professional wrestler and I am home.

When I left Arizona, I went to work for Leroy McGuirk out of the Tulsa office. We worked Oklahoma, Arkansas, Louisiana, Texas, and Mississippi.

I left the Tulsa area and went to work for Lee & Bobby Fields out of the Mobile office. We worked Alabama and Florida. When I left the Mobile area, I went back to the Tulsa office.

After the Tulsa area, I went to work for Don & Elton Owens out of the Portland office in my hometown of Portland, Oregon. Home Sweet Home.

We worked Oregon, Washington State, and made a few trips up to Vancouver B.C. and worked for Sandra Colfax. When I left the Portland area, I went to work for Dean Silverstone out of the Seattle office. I loved working for Dean, a real people person. He loved the business and the wrestlers in it.

When I left the Seattle office, I went to work for Nick Gulas out of the Nashville office. We worked Tennessee, Alabama, Kentucky, Indiana, Mississippi, and Arkansas.

The Nashville office was divided into two sections, one promoted by Nick Gulas and the other by Jerry Jerritt. I was very luck to have worked for both sides of the different promotions. Jerry Jerritt was great to work for. Jerry knew the wrestling business extremely well, what would draw big houses and always paid the wrestlers very well.

When was your last wrestling match?

I started thinking about retiring from wrestling in mid 1977 and started to seek another career. In November of 1977, I gave up, the most exciting career a person could ever hope to experience.

I did some appearances for Plowboy Frazier (he was promoting some spot shows) and I had the last match of my career with him. I finally gave up wrestling and moved to Denver, Colorado and started a new career.

What are you doing now?

Do you have a web page?

My son is a computer graphic artist. He designs and develops web pages so the answer to that question would be yes. You can visit my web site at www.legendofwrestling.com and please feel free to send me an email.

What do you think of wrestling today on cable?

The wrestling today is nothing like what it was when I was in the Business. Very little wrestling, all gimmicks. It is more like a television soap opera, who is dating who…just is not the wrestling of old.

On the other hand, I have to give the wrestlers and the promotion of today credit. They are selling out all the shows they have everywhere they go so maybe they are doing something right? Maybe that is what the wrestling fans want now is a three-hour show with all blood and guts, lot of gimmicks and not too much wrestling.

My personal opinion – what ever you men and women of today’s wrestling have to do to keep wrestling alive and performing, then do it. The wrestlers from past have seen too many territories stop running and die out. I do not want that to happen again. Even though I can not wrestle any more I will always be a fan and hope that there will forever be professional wrestling for everyone to enjoy.

I would like to thank you for taking time from your busy schedule to have this interview with me. I feel very honored to be able to share my experiences with you and the wrestling fans.

Although I am not in the wrestling business any longer, wrestling is still a very big part of my life. There is not a day that goes by that I don’t think of the past, some funny thing that happen in the dressing room or in the ring years ago, or all the good matches I had, the outstanding performers I had the pleasure of working with…God I sure miss them.

My biggest wish is, I hope I have given the wrestling fans as much enjoyment, excitement, fun and entertainment as they have given me throughout my career. I have always believed you get out of something what you put into it, and I put all my heart, body, and soul into wrestling. May it go on forever.

<< Back to main press page 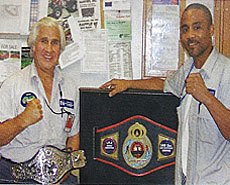